This is the third installment covering the Gruppe I in the organizational chart of the 6. Abteilung des Generalstabes der Luftwaffe (Generalquartiermeister). I have decided to split this post in a part a and b, simply due to the fact that there is so much to write about!

The responsibilities and staff size of division I C was:

Bearbeitung der Beutemeldungen (Handling of the reports on captured equipment),

Kriegstagebuch der 6.Abteilung (Responsible for the war diary of the 6. Abteilung),

Wahrnemung der Aufgaben des Bürooffiziers (Responsible for the tasks of the Office leader - a position in the staff of the group).

The personnel staff of division I C was 1 Officer with general staff rank and education, 1 Officer from the flying units and 7 office clerks and typists.

To the Luftwaffe researcher the I C unit is definitely best known as the unit producing the daily loss records. These daily records evolved during the war, in their purest form they contained information on loss date, unit, loss reason, location, details on the aircraft and personnel involved and so on.

I include three example pages from a loss report, to give those that have not seen one of these yet, a bit of insight on how they look, and what they contain. I count myself lucky that I have finally finished my project on turning all the available records into .pdf files - and most of the records from them have been transferred to a relational database making them searchable.

The first example page show the front page of the report of July 4th 1941. Note the document reference designation in the top left corner, Genst.Gen.6.Abt.(IC) Nr. 3620/41 G.Kdos. Written out this reads Generalstab Generalquartiermeister 6. Abteilung (IC) Nr. 3620/41 Geheime Kommandosache. The IC and number naturally show that this document which was record number 3620 of the year 1941 produced by the unit.

In the top left corner we find the date, and where the document was made (H.Qu. - Hauptquartier) - and the fact that it was made out in 21 copies, of which this is copy number 17! More about that later.

As one can see this document contains a number of corrections - both on names, crew fates, Werknummer of aircraft and loss reasons. It is apparent that the documents were at least reviewed on the higher headquarters level, and compared to what they had reported to the Generalquartiermeister. I will return to the procedures involved in the registration and transfer of loss records in a later post.

The ordinary loss page as seen below contain the detailed information on the individual loss. From left to right we have:

There are a few more interesting things on this page - firstly one can see that the records have been corrected a lot in handwriting - on the original pages this is in red pencil and easier to read than on this grayscale scan from a microfilm. All the corrections can be found in subsequent reports and thus cross referenced.

The other thing I related to which issue this copy of the loss record is, and I will reveal this finding shortly, as we move on to the last example page I am going to show, namely the last page of the report document for this day:

Looking at this page one can see the summary information of the records for this date, and the total numbers for July 1941.

What was interesting for me to note when I first started working on these documents was the Verteiler list in the bottom left corner.

As we can see there was a large number of copies made  - and from this list one can see who received it:


I think this is of importance with regards to efforts on locating the missing records of 1944 - as the number of copies was rather large, it is not unlikely that one of the copies for at least some of the dates are hiding in a unmarked book somewhere still.

The observant reader noticed that we are looking at copy number 17 - thus the copy sent to Generalstab Generalquartiermeister 6. Abteilung (IB) - the statistics people. What I found while reading working on the documents were a set of encodings for statistical use. Not all the available copies are the ones delivered to Generalstab Generalquartiermeister 6. Abteilung (IB), and on the copies delivered to the other units the encoding is missing.

What I am talking about is the pencilled roman numerals in the left margin, as can be seen on the second example page with the detailed loss information - and the arabic numeral pencilled in before the F/H column. These are the encodings used to transcribe the unit information and categorize the loss reason for the Summarische Verlustmeldungen - summary loss records.

They definitely are. And so are the personnel involved on the summary personnel loss record sheet, one dead and one wounded crew member: 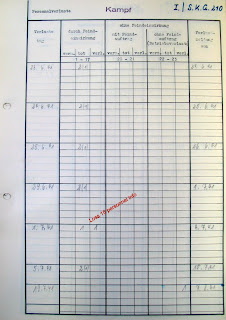 This of course help us when we are trying to piece together the loss records of the missing year 1944 - we have the summary loss record for that year - and thus we are at least able to get an overview on a statistical level of the losses sustained by the Luftwaffe during that fateful year. For the next part of the series I will add even more sources to the list! 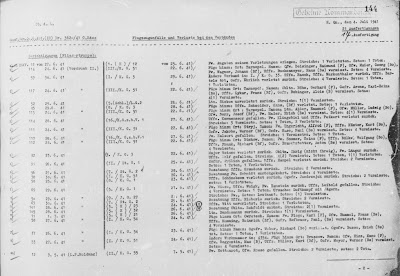